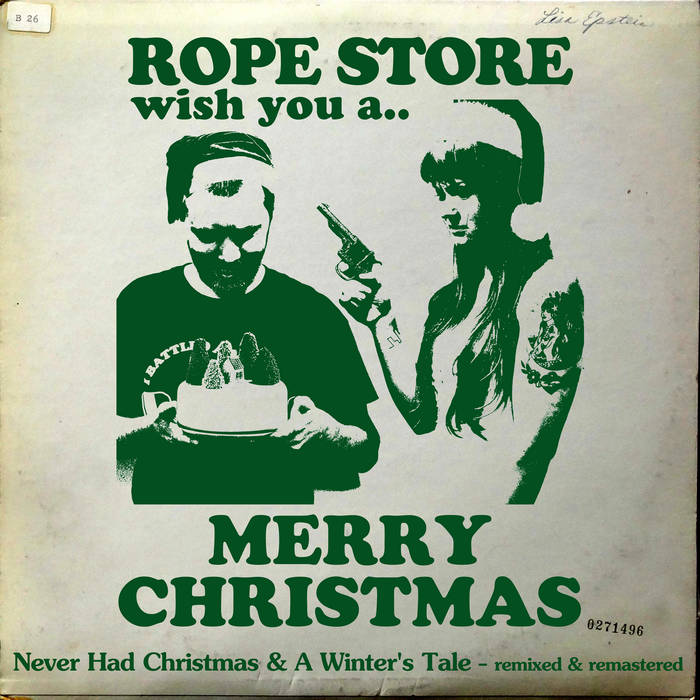 'Never Had Christmas / A Winter's Tale' by Norwich, UK's Rope Store was one of the four singles released in 2016 as part of the fourth edition of the Snowflakes Christmas Singles Club. The single received unanimously enthusiastic reviews, so Rope Store decided to remix & remaster it unnecessarily, fresh for Christmas 2017!

A-side 'Never Had Christmas' brings bands like Wizzard, Slade and The Wombles to mind, bands that also knew how to write a catchy Christmas song, taking their inspiration from Phil Spector's legendary 1963 Christmas album. 'Never Had Christmas' has everything a Christmas rock song needs: catchy vocals, (glam) rock guitars, Christmas bells, a rhythm that invites you to clap-a-long, an instrumental break with a wall-of-sound production that blows you right out of your Christmas socks, and of course an important message: Christmas is all about the friends you love and the family that you really get on with!

For the B-side, Rope Store chose a song originally recorded by another star of the 1970s (althought the song was actually from the early 1980s) and written by Mike 'Wombling Merry Christmas' Batt and Tim 'Evita / Jesus Christ Superstar' Rice: David Essex' hit single 'A Winter's Tale'. Rope Stope manage to turn the original, a ballad that sounds like it was lifted straight from a musical, into a sing-a-long glam rock song, without compromising the dramatic meaning of the song.

STUBBY'S CHRISTMAS - I predict this one will be very popular. The UK band Rope Store is an Indie Pop duo with soulful overtones. Their sound is very early 60s. The band's original, "Never Had Christmas", draws a bit from Glam, which makes sense as some of the most beloved Christmas singles from England were Glam Rock faves like "I Wish It Could Be Christmas Everyday" and "Merry Christmas Everybody". For the flip, the band is covering "A Winter's Tale", the Christmas song David Essex did in 1982. Check out Rope Store's "What Life's All About" and I believe you'll have identified your new favorite band. (Ignore the Santa hats, though; it was released last Christmas but isn't really a Christmas song, per se).

THE SUNDAY EXPERIENCE - Returning with more of those Snowflakes Christmas Club sorties, admittedly I nearly forgot about these, anyhow third of the four tinsel treats comes courtesy of Rope Store whose ‘Never Had Christmas’ as the press release rightly states is a time travelling sleigh ride back to the Christmasses of the early 70’s. Within 5 seconds of this kicking in, I’m faced with my youthful self donning a Spock mask sitting wide eyed watching Top of the Pops and tapping toes a furiously to the Slade and the Wizard while my brother eyes from afar waiting for the Wombles to appear. Pure glam gold seasoned in a sepia framed vintage sung by folk who looked like bricklayers in make up sporting hair of unusual voluminous quantity whilst teetering on unfeasibly high skyscraper styled platform boots bedecked in outfits made from stuff we used to wrap the turkey up in. them were the days. Rope Store impeccably recreate the same with affectionate aplomb on this infectious blighter. Now call us hopeless souls but just between you and me, I’ve always had a soft spot for ‘Winter’s Tale’, in fact in the highly unfashionable year of 1982 I was the short lived president of the 6th form David Essex fan club marvelling to impromptu and rowdy renditions of ‘oh what a circus’ and ‘gonna make you a star’ much to the puzzlement of the assembled make up wearing new romantic fops with the Duran Duran fringes and awkward musical tastes – ahem – Billy Joel. But enough of my gallant quests to ride the outsider seas, Rope Store set to work tackling ‘Winter's Tale’ and in to the bargain give it a deliciously fuzzy power pop overhaul which unless our ears do deceive sounds not unlike some waywardly wonderful lost trick by some hastily assembled Elephant 6 collective seasonal studio soiree. Adored in short.

OUTLINE - I do love a Christmas single. Songs like Merry Xmas Everybody, I Wish It Could Be Christmas Every Day, and of course The Fairytale of New York may now seem like timeless classics, but I still remember lovingly buying each one on original 7” vinyl. Keeping that spirit alive in 2016 is Norwich band Rope Store who have written and recorded Never Had Christmas b/w a cover of David Essex's 1983 classic A Winter's Tale. Part of this year's Snowflakes Christmas Singles Club collection, those lucky enough to purchase the physical version will have their hands on a beautiful snowflake-white vinyl 7” complete with sleeve photo of Gemma and Jason tobogganing down the Alpine equivalent of Ketts Hill. As you would expect, Never Had Christmas has a distinctly retro feel that brings back the magic of the early Seventies. With an opening that is pure Bay City Rollers, before launching into full Wizzard-Slade-Showaddywaddy mode, this is a feel-good belter that warms quicker than an egg-nog fondue. Lots of snow and mistletoe, mentions of family and friends, and a couple of curveball references to bananas and spaghetti together make this the best new Christmas song that I've heard in years.
8/10 - David Auckland

Sung by Gemma & Jason.
Played by Jason.
Recorded by Jason & Gemma at Old School Studios, Norwich, UK.
Re-mixed & re-mastered in a bedroom in Norwich by Jason.

Bandcamp Daily  your guide to the world of Bandcamp

Guest hosted by Tamar Osbourn aka Collocutor and Toshio Matsuura.