Never Had Christmas / A Winter's Tale 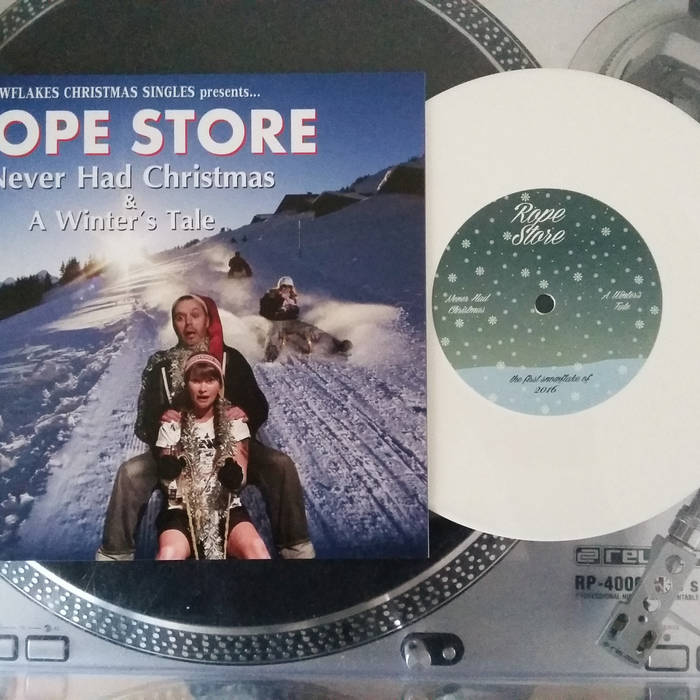 'Never Had Christmas / A Winter's Tale' by Norwich's Rope Store is one of the four singles released as part of the fourth edition of the Snowflakes Christmas Singles Club. A-side 'Never Had Christmas' brings bands like Wizzard, Slade and The Wombles to mind, bands that also knew how to write a catchy Christmas song, taking their inspiration from Phil Spector's legendary 1963 Christmas album.

'Never Had Christmas' has everything a Christmas rock song needs: catchy vocals, (glam) rock guitars, Christmas bells, a rhythm that invites you to clap-a-long, an instrumental break with a wall-of-sound production that blows you right out of your Christmas socks, and of course an important message: Christmas is all about the friends you love and the family you really get along with!

For the B-side, Rope Store chose a song originally recorded by another star of the 1970s (althought the song was actually from the early 1980s) and written by Mike 'Wombling Merry Christmas' Batt and Tim 'Evita / Jesus Christ Superstar' Rice: David Essex' hit single 'A Winter's Tale'. Rope Stope manage to turn the original, a ballad that sounds like it was lifted straight from a musical, into a sing-a-long glam rock song, without compromising the dramatic meaning of the song.

Rope Store from Norwich, England, is the result of a spontanous recording session of Jason Baldock and Gemma Dietrich, who met in a local pub, where Dietrich worked as a bartender and Baldlock was a regular customer. Baldock owned a recording studio, located in a disused Cold War bunker, where the duo record all their songs. They don't waste any time in the process: they write a song, work out the arrangement, and record it directly to a reel-to-reel 8-track recorder, using only one microphone for every instrument and mix and mastered it the same evening.

Rope Store's music is a playful blend of ‘60s inspired pop, old school soul and laid back rock and roll, with a definite groove that makes you dance along to the music, and the spontanous way the songs are recorded adds to the energy and liveliness of the songs. Debut single 'All Of Me' / Stop' was released in December 2015 by Seal Of Approval, and only three months later, in March 2016, the second single of the band, 'That's Not Good Enough' b/w 'Get Me Out', was released on Heavy Soul Records. Late 2016, the band self-released a cassette album containing all their recordings.

Bandcamp Daily  your guide to the world of Bandcamp

Guest hosted by Tamar Osbourn aka Collocutor and Toshio Matsuura.